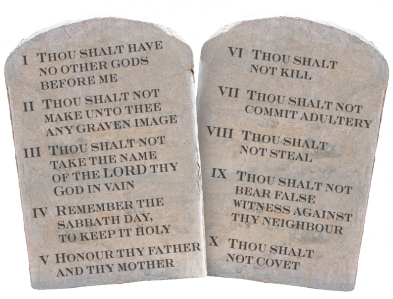 We all see good and bad in the world.  If there is a "God," then it's only right that God should "reprimand" bad people while "rewarding" good people. Our consciences consistently affirm this idea, and all sorts of religions acknowledge the principle in some fashion.

The Bible speaks about the "reward" being heaven, and the "reprimand" being hell.  If there's a chance that the Bible has some truth to it, and since it speaks of hell a real place, then each of us should ask a very important question:

Am I good enough to go to heaven?

How did you do on these three of the Ten Commandments? If you are reasonable, reflective human being, you may now be recognizing for the first time the truth that God revealed for mankind to understand — that you are really guilty of breaking His Law! And not just once, but over and over both in your heart, and in deed.

And remember, there are still seven other Commandments that we haven't touched upon here, but which hit us in the same manner when we compare ourselves to them.  You can see them all in Exodus chapter 20 of the Bible.

But am I really that bad?

If God judges you according to the Ten Commandments, will He send you to heaven or to hell? Before you give a quick answer thinking that God is forgiving or that your good works outweigh your bad, think about a court of law…